It goes without saying that Seville is a city steeped in history and tradition. But we want to go beyond typical things like flamenco and folklore... The history and tradition of Seville is so vast that you can find it in many places, beyond monuments and popular spots. Shall we forget about the typical tours that you can find in guide books? For example, we can trace an alternative street map of Seville using literary references and spots that are connected with literature. Many of those places will help us to see what Seville was once like and what traces of the past we can find. Let's go! 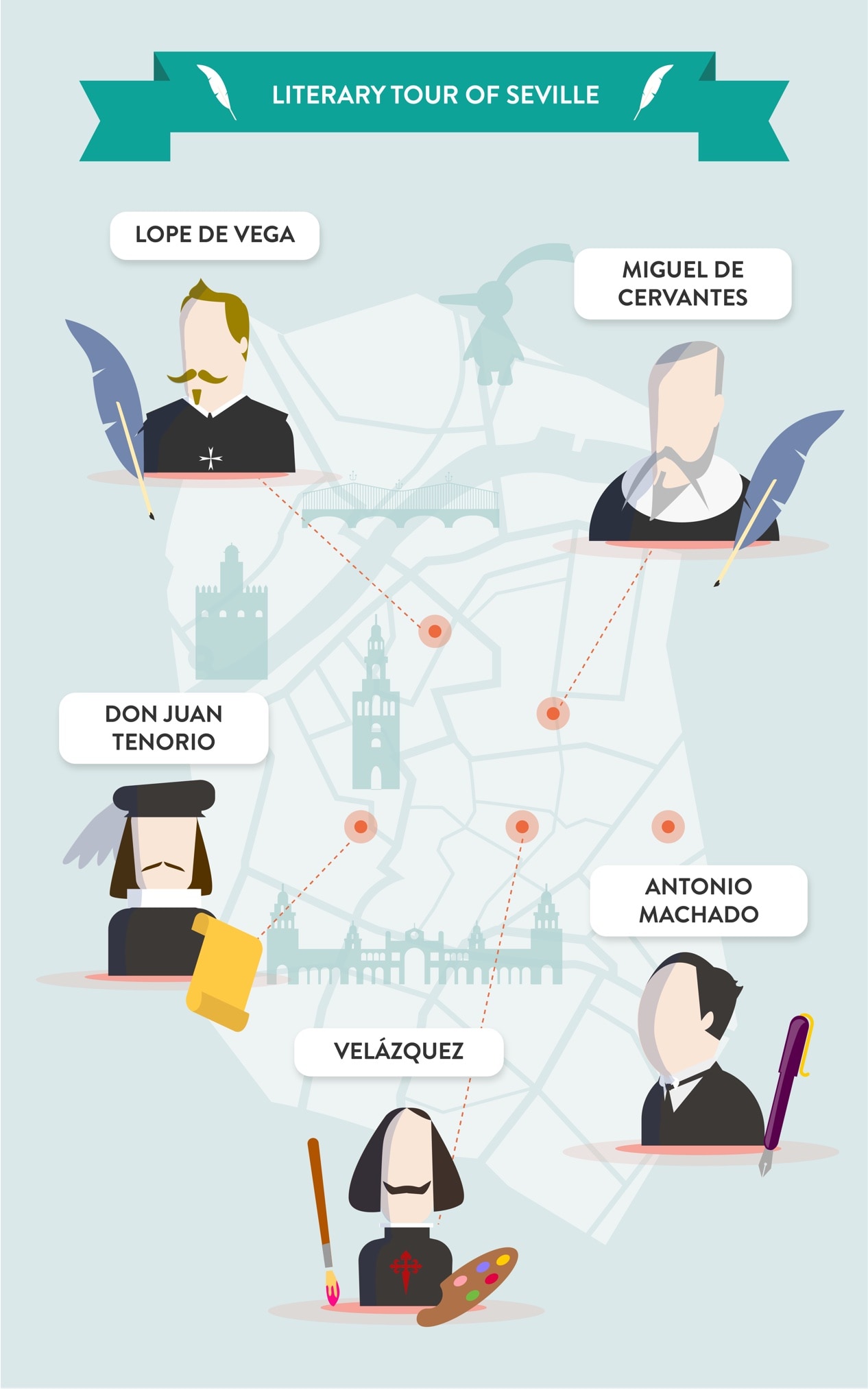 Let's start at Triana Bridge and walk towards El Arenal, the neighbourhood where you find the bullring. We'll walk past a plaque saying that the comedies of Lope de Vega were premiered in this classic neighbourhood, and then we'll get to Calle Entre Cárceles, where we'll find a statue of Cervantes. This street is called "Entre Cárceles" (Between Jails) because there used to be two jails here: Cárcel Real and Real Audiencia. Miguel de Cervantes was held in one of the cells of the jail, which today is a restaurant, Taberna EntreCárceles. He was jailed after being accused of keeping part of the money he collected when going from door to door as a tax collector. Writers back then also needed side jobs to survive! Within those walls, which today are the walls of a bank, he came up with the idea of Don Quixote. Or at least that is what he tells us in the novel's prologue.

We can then cross two squares, Plaza del Salvador and Plaza del Pan, which are popular spots in the city (you can see for yourself at midday on a Saturday, for example), and they were also key places in Luis Cernuda's childhood. He wrote about them in his book “Ocnos”. The poet, who died in exile in Mexico in 1963, was born on Calle Acetres, a narrow alley very close to these squares. There is a plaque outside the house where he was born, which currently belongs to a glazier and has recently been put up for sale.

We carry on with our walk, leaving the famous “setas” (mushrooms), Metropol Parasol, behind, and we arrive at Las Dueñas Palace, on the street that has the same name. The palace belongs to the Duke and Duchess of Alba (the well-known Duchess of Alba died here), but a monument at the entrance reminds us that poet Antonio Machado was born in one of these houses in 1875. You can visit the rooms and the courtyards in the palace, which the poet reminisces about when describing his childhood as “An orchard in the light where lemons ripened every fall”.

We can make a pit stop on Calle Feria or Calle Dueñas (just pick any place, you can't go wrong!) and then walk back through the narrow streets towards the Cathedral. On your way you might walk past the birthplace of Velázquez, on Calle Padre Luis María Llop, but you won't even notice. There is nothing outside the house to remember the painter, although a project was recently launched to restore this small house next to Plaza Cristo de Burgos.

There are several places you can get to from here: Santa Cruz neighbourhood to discover the setting of Don Juan Tenorio (a classic on tours around Seville), or the river, next to Puerta de Jerez, to see Yanduri Palace and the plaque that tells us that poet Vicente Aleixandre, winner of the Nobel Prize in Literature in 1977, was born there.

Discover Seville in a different way

If by now you're a bit tired of just seeing plaques, you can do something different on this literary tour: you can visit Soho Benita, Seville's most fashionable district. What has it got to do with literature? Well, the name “Benita” comes from Benito Pérez Galdós, the writer after whom the district’s main artery is named. It is the hub of this cultural movement that is emerging in the city. This area seems to want to break away from the classic image of Seville that is resistant to change. There are all kinds of places to be discovered: galleries, restaurants, shops, and bookshops, of course! We recommend Un Gato en Bicicleta, an iconic bookshop that not only sells books: it also has a café and a pottery workshop, and it is a cultural hub for this new movement that is emerging in Seville.

Start your tour around Seville